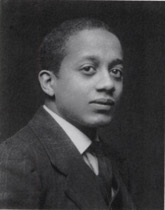 Alain LeRoy Locke was born on Sept. 13, 1886, in Philadelphia PA. He was an American educator, writer, and philosopher, who is best remembered as a leader and chief interpreter of the Harlem Renaissance.

He graduated from Harvard University (1907) with a degree in philosophy. Locke was the first black Rhodes scholar, studying at Oxford (1907-10) and the University of Berlin (1910-11). He received his Ph.D. in philosophy from Harvard (1918). For almost 40 years, until retirement in 1953 as head of the department of philosophy, Locke taught at Howard University, Washington, D.C.